Can I do triathlons? I’m totally unfit and lack the right gear. 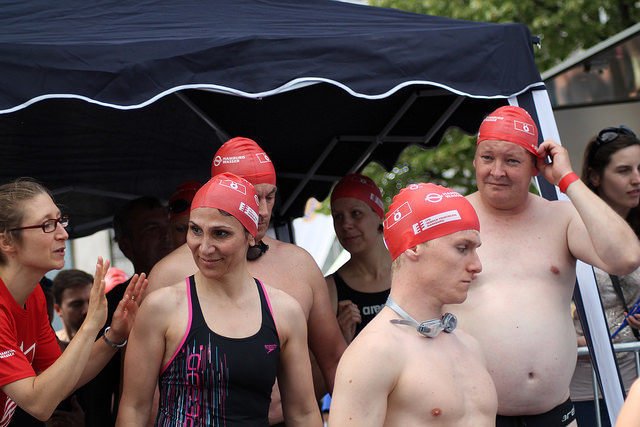 "That sounds really hard, I could never do it."

​This is a common statement non-triathletes make when they first learn about triathlons, or talk with a triathlete. And it's a real shame, because anyone, yes anyone, can do a triathlon. There really are no prerequisites for it.

The only thing you need is some time to prepare. And the right motivation to actually get out there and do it.

It doesn't matter if you're completely unfit, don't know how to swim, and you're 50 lbs overweight. And it most definitely doesn't matter that you don't have a fancy bike and wetsuit, and shiny objects you see "serious triathletes" have. In this post I'm going to tell you why, if you've ever found yourself wondering if you can do a triathlon, the answer is heck yes you can!

​This post is continuing our series about getting started in triathlons for beginner triathletes and prospective beginners. If you haven't already, check out the previous posts, covering the nuts and bolts of triathlon and why you should get started in triathlon, and what 6 age-group triathletes did right and wish they would have done differently when first starting out.

​Also, before you go after reading this article, grab your free Five﻿-step roadmap for completing your first triathlon, and you'll be ready to get going in a few short minutes.

All right, now let's dive into the meat of why anyone can do a triathlon.​

I'm so out of shape - how can I possibly do a triathlon?

First off, when starting out you don't want to do an Ironman. Period. I know it has been done (people having an Ironman be their first race), but as glorious and cool as that is, it's not the smartest choice.

The smart ​way to go is to have your first race be a sprint triathlon. They are usually as short as a few hundred meters of swimming, 20 km (12.4 miles) of biking, and finish off with a 5 km (3.1 miles) run.

Now this is not something that anybody can just go out there and do today. But the distances are short enough that a sprint triathlon is definitely within almost anybody's reach in a few months time. The sooner you start training the sooner you'll be ready!

For most, the hardest part will be either the swim or the run. The swim is obviously the most challenging leg of the event if you don't know how to swim (see below)​. The run poses problems especially if you carry more weight than you should, and have been sedentary for many years. People with families and busy desk jobs, who haven't been active at all since starting their working life and have gained weight as a consequence are prime examples of people who might find running even a few blocks difficult.

We'll talk about the swim in just a minute. As for the run, it really is just a question of starting small, and gradually adding distance to your runs.

If you can only run five streetlamps down the block today, next week you might go ten. Run slow, but be consistent (start out with two runs per week) and you'll be surprised how much you can improve.

​The bike isn't much of a problem, even if at first the distance may sound terrifying. The good thing is, almost anybody knows how to bike. No need to learn any new skills, as for the swim, and even the run (yes, running is actually a surprisingly difficult skill, but that's another story).

Just as in the above example for the run, you'll find that if you increase the distance of your rides in small, bite-size chunks, you'll find yourself doing rides of race distance and longer pretty soon.

Biking is also a great way to just increase your general fitness and endurance, not to mention to lose weight. In contrast to running you can bike quite a lot without really risking getting injured.

If you have the opportunity, biking to work is a great way to save time and make sure you get a good amount of training in. Many workplaces have showers and locker rooms so you can leave your clothes at work and get changed when you get there. It might take some time to figure out the logistics (maybe you take the car to work on Mondays and bring all the change clothes you need for the week) but once you do it you'll benefit a whole lot from it.

To sum it up, start to bike regularly. For example four times a week to work and maybe once on the week-end. Add two runs a week​, starting with only as long as your current level allows, even if it's just one block. Stay consistent, and slowly but surely increase your distances. You will increase your endurance and general fitness level in no time. If you need to lose weight, combined with healthy eating habits you'll also start seeing pounds falling off.

You're already well on your way to your first triathlon!​

This is another common obstacle that makes people doubt they can do a triathlon.

And for good reason, because you need to know how to swim to complete a triathlon. That being said:

If you don't know how to swim, you should get a good swim instructor to teach you the basics. Or join a masters' swim class, but make sure the instructor has time to give you specific instructions and tips in that case.

Whichever you choose, there's no substitute for having someone physically present at the pool deck and tell you what to do, why to do it, and how to do it. Just trust me on this one.

Besides the obvious, learning how to swim, you'll have the added benefit of getting accountability to somebody, which is great for motivation. If you just try to teach yourself, chances are you'll get frustrated when you don't progress as quickly as you'd like, and you'll just quit instead.

Most importantly​: anyone can learn how to swim. Not knowing how to swim is not an excuse for not starting learning right now!

What about gear? I don't have any triathlon equipment.

Contrary to popular belief, you don't need a lot of gear to get started. I'll cite an expert in the field (if you clicked the link, I'm joking, kinda...) and tell you that all you need is:

You may already have all these pieces of equipment and gear at home, or you can get what you don't have for really cheap. I'd encourage you to get a pair of good running shoes from a real running store where an expert can help you get a pair that will suit you. But other than that, anything you can find will be just fine to get you through your first race.

Not only is fancier, more expensive gear not necessary to complete your triathlon. It might actually be counterproductive in some cases. For example, some people that buy really expensive wetsuits or bikes start relying on the gear to the extent that they train less than they would otherwise.

And in the end that ​extra swim session is going to be so much more valuable and meaningful than the wetsuit, no matter how fantastic it is.

Still not convinced? If these people could do triathlons, you can too.​

If you're still on the fence about whether you can get started in triathlon or not, let me give you a few examples to prove the point that anybody can really do it:

So there you have it. The question "Can I do a triathlon?" conveniently answered for you. Maybe some myths about fitness-level needed and gear required got busted along the way. Hopefully you're now full of motivation and inspiration to stop thinking about starting out in triathlon, and just start doing it!

Speaking of which, make sure to read the next post in this series, on how to actually start training​. Don't miss it, follow along in the series by signing up below and you'll get an e'mail every time a new post comes out.

Thank you for reading, and feel free to leave a comment or ask questions below. Until next time, remember that given time, anyone can do a triathlon!