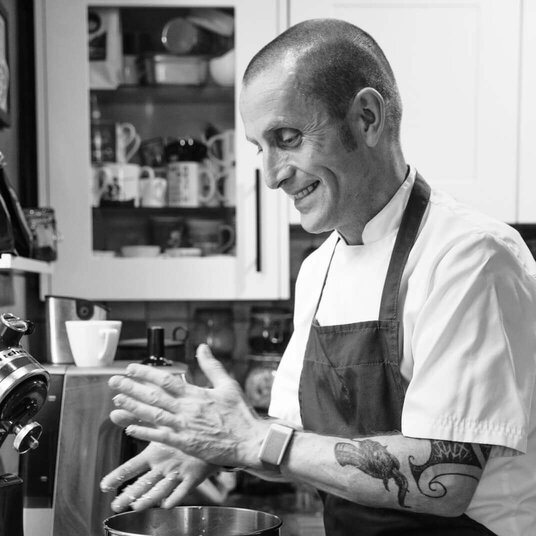 Alan Murchison is a lifelong endurance athlete, and one of few athletes to both run under 30 minutes for 10k and ride under 18 minutes for 10 miles. He is also a chef, with 25 years of experience in Michelin starred kitchens. Today he runs Performance Chef, where he works with athletes from amateur level up to the highest possible level in the sports of triathlon, cycling, and other endurance sports. He brings a practical and holistic perspective to food and nutrition for endurance athletes

Quick Navigation
In this episode you'll learn about:
Sponsored by:
Shownotes
Alan's introduction
Performance Chef
Where Alan feels he has the most impact
Importance of having a guide
Fundamental principles of nutrition during training
Energy availability
Calibrating your food intake
Having moderation
Fundamental principles of daily nutrition
Alan's view on diets
Veganism
Tips for vegetarians and vegans
Other diets
Habits of professional athletes
Measuring metrics
Athletes with eating disorders
Good things about elite athletes
Examples of identifying what success look like
Other considerations about professional triathlon
Differences between male and female athletes
Takeaways from the topics discussed
Rapid-fire questions
LINKS AND RESOURCES:

Where Alan feels he has the most impact

Importance of having a guide

Fundamental principles of nutrition during training

Tips for vegetarians and vegans

Other considerations about professional triathlon

Differences between male and female athletes

Takeaways from the topics discussed

The Midlife Cyclist: The Road Map for the +40 Rider Who Wants to Train Hard, Ride Fast and Stay Healthy by Phill Cavell

More Fuel You: Understanding your body & how to fuel your adventures

(Academia tends to overcomplicate, so I read sports science books)

Learning from the different genres of sports. When I left the high-performance kitchen, I set Performance Chef because there was a missing link. Do not sit still. You have to keep evolving as a person and get out of the discomfort.

Once you know everything, you are done.

The human element inspires me. There is a diver that medaled in the Olympics called Andrea Spendolini-Sirieix. She went on to talk about body image in sports on live TV at 17.

I loved working with Glenn Jorgensen. She had a winning mindset.

Evie Richards (WC in MTB) did a piece about disordered eating.

Anna Kiesenhofer (Olympic Champion) worked out how to beat the best team in the world.

However, Jan Frodeno is the one that inspires me the most.