The Hour record and aerodynamics with Dan Bigham | EP#368 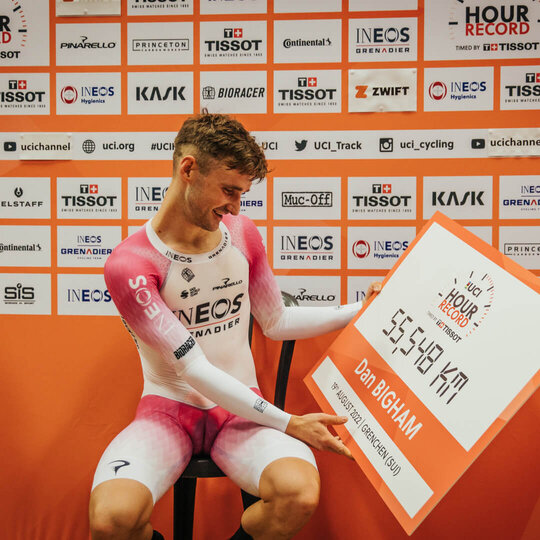 Dan Bigham is a performance engineer at INEOS Grenadiers, founder of Wattshop, and former World Hour Record holder (with 55.548 km). In this interview, we discuss the hour record, the Sub7 project that he was heavily involved in, and the latest and greatest in the world of aerodynamics.

The decision to take on the hour record

The numbers from the hour attempt

Current projects Dan is working on

Pieces of advice for beginner athletes

1:07:39 -
Best stretch to become more aero
Anything about neck, shoulders, and traps, primarily.

What is the craziest thing you did in the name of aero?
Basically, crossing my arms over.

Any gains from sizing up the TT bike?
A bike might not be optimal outside of its range, but it is minimal.

Are shaved legs faster? Could you cover your legs with oil?
Lotto-Soudal did that in 2017-2018 when they had hydrogels. So, there is some benefit.

Tri-spoke or deep front wheel?
I am a fan of tri-spokes when moving into disc wheels.

What made your hour Nimbl shoes better than the regular model?
They were more aero. Nimbl has a program where you can create your shoes. I am not a fan of full-carbon shoes because I find them uncomfortable, so I had a hybrid model and changed the shape slightly.

Is getting armrests narrower always better?
It is to a point. There are some other trade-offs.

Flat back or arched back?
Whatever is faster.

What is the fastest hand position?
It depends on the rider. For some, we might see improvements in others, while for others, it cannot.

If the tailwind is faster than you, is it worth being as big as possible?
You could sit up if the tailwind is equal to the ground speed. However, if you are going at 40 km/h and the tailwind is 50 km/h, the net drag force pushing you forwards will be 10km/h, which is minimal.

1:14:45 -
What is your favourite place to train?
The Velodrome. My three favourites are Barcelona velodrome, the home town Derbados velodrome and the Copenhagen one.

What is a bucket list race you would want to do?
Land's End to John O'Groats cycling challenge (42-hour record)

If you could acquire any skill in an instant, what would it be?
Python coding or the ability to design and manufacture a circuit board.